Huang Po Hsun was born in early 80’s. He has been moving around Taiwan over 17 times since his college life – 2000, and been artisicaly residency – Tainan, Taipei, Pingtong, Kaohsiung, and so on. Therefore he is diligent and positive. For all of these experiences, his quantity of works and experiences are quite an amount. In his works, the style is quite strong and with highly visual attraction, the colors of his works are sweet, abundant, rich, beautiful, and the organic shapes are hard to describe. The elements in his paintings are so splendid that looked like bouquets of flowers. However if you consider those ‘scenes’ could be traced back to his wonderful living experiences, you would be confused by some abrupt shapes such as the spikes on the stems or hearts, transparant and fragile glassy objects, ghostly wooden figures, unexpected gloomy colors, uninterpretable chinese characters, and the floating islands like those in the anime《Castle in the Sky》by Miyazaki Hayao.
‘Because life is abundant and lonely’. He likes to emphasize the ‘loniness’ in his self narrations. He moves around this city to another to make a living. When he is home, he is always alone. His works are made under this circumstances. What accompanies him is rarely a real human. He spends time on painting, music, novle, comics, and the internet. This pattern of life is a classic single otaku life of a post 80’s. You can be definately questioning ‘Did the repeatedly motifs shown in his paintings come from the populous city day lives or the otaku world in the lonely tranquile nights ?’

A Generation Leaded by Subculture

Let’s look back into the 2000 when Huang Po Hsun started his artist business. It was the day that the standards of art education in Taiwan were swinging between the ‘high art’ such as western avande garde art and traditional Chinese art. At 1960’s. The daily life was filled with comics, anime, toys, vedio games, and movies. Those elements were not considered as art at that time. They were called popular culture, or subculture. Then let’s step into 21st century. Several important exhibitions were held continously. 《Fiction Love》held by MOCA Taipei in 2004 and《Desire and Consumption – Kaiyodo and Otaku Culture》held by TFMA（Taipei Fine Art Museum）in 2007. They seemed to reveal the influences that Taiwan young gernation artists had taken, and declared the transition of how subcultures passed to contemporary art.
This is traceable in contemporary art, such as《High and Low》held by New York MOMA in 1990, and《Art et Publicité》held by Centre Pompidou in 1991. It seemed the line between the ‘high and low art’, ‘fine art and pop art’ had been blurred. The subculture in Japan was also jumpped to the stage of contemporary art. The《Super Flat》of Takashi Murakami was an important rule in this tide. Other japan artists such as Yayoi Kusama and Yohitomo Nara were repeatedly shown in the art fairs in Europes and America. At the same time, younger japan artist such as Aya Takano were regularly presented by Galerie Perrotin of Paris. The previous mentioned《Fiction Love》was curated by Viki Lu. She considered the elements in virtual worlds (comics, anime) such as digital videos, febulous colors, and the flashing lights as a new century aesthetic standard. This exhibition even declared it blended the populous art and contemporary art. In order to make a difference from the western art, this exhibtions mainly concluded China, Japan Korea and Taiwan artists. The《Desire and Consumption – Kaiyodo and Otaku Culture》was so popular that attracted over 400,000 people. It showed how much that Taiwan young generation interested in comic culture – Otaku and Doujinshi. The curator Takeshi Kudo explained the word ‘otaku’ : This word was created around 1980’s. Otaku are new humans whose father is material society and mother is the digital information. They can handle the materials and information delicately, and create a new type of consumption.1 And, at the 2004 Venice Biennial, the Japan theme is OTAKU : persona-space-city.
Huang Po Hsun’s artist career was taken steps in this generation. He did not mention any relationships between his works and the subculture, he can not even be counted as a real otaku. However, the pinky, sweet, fluorescent colors and the special shapes in his painting are like the specialties that presented in ACG（anime, comic, game）. In fact, He was once a part-time designer and illustrator. He painted with the skills and senses what a designer and illustrator has. This is like the blend of high art and low art. However, his stratagies to art works contained two main specialities in the long modern art history : Flatness and Decorative.

Toppling down the barrier of high art and low art is a continous process of revolution. From the Pre-Raphaelite Brotherhood to Paul Gauguin, Pont-Aven and the Les Nabis, they were all enjoyed in the combination of decorative arts and hand crafts. The art group of Belgium Les XX invited some artists who had declared that they were the earliest artists leaving art for industrial art to show their posts, picture books, and pottery works in their 1891 salon. In 1895, the Art Nouveau of Galerie Bing connected all kinds of art, low and high.
Yet, the intention to level the differences of high and low art lead to a surprising outcome : the unpractical modern paintings started to use flat painting skills, simplified shapes, the arabesques, and to diminish the perspective. They made the paintings ‘decorative’. Hegel’s ‘Aesthetics’ from 1818 considered the painting is only existed for visual sense, and compare paintings to sculptures and architechtures, paintings are always lack of 1 dimention2 . Therefore Hegel consider the flatness is the essential of painting. Clement Greeberg considered the ‘flatness’ as the definition and the destination of contemporary paintings. However flatness is merely the appliance of the decorative paintings. The flatness destroyed the system inherited from Renaissance and confused painting and decorative painting as Paul Gauguin did. The art critic Georges-Albert Aurier considered art works are idealistic (idéiste), symbolic, synthetic, subjective and decorative. He explained: ‘decorative painting is, properly speaking, true painting. Painting can have been created only to decorate the bare walls of human edifices with thoughts. Dreams and ideas.3
Huang Po Hsun usually paints the acrylic on the extraordinary smooth canvas skinned by calcium carbonate. He uses these materials to create the delicate, thin, and transparent effect. He wanted to avoid the effects created by oil painting – the shinning, think, and the oiled textures. It’s hard to find a specific point of view, a horizon and the perspective in his paintings. The backgrounds of his paintings are usually presented in ways of Japanese wood engraving printing, or the ways of watered traces. The composition of his paintings are often centered and symmetrical. The details are complicated however you can find basic simple organic elements such as petals, scales, tentacles, thrones, and folds; or the geometric patterns. All of these elements were built up into a big group. This is not naturalistic but decorative. Through this, his works responded to the discussions of contemporary painting essentials.
Other than paintings, Huang Po Husn had tried sculptures in recent years. He painted on the resin sculptures. He tried this to blur the line between the painting and sculpture. He even started a program to paint 100 resin flower balls –《100-Flower-Program》to challenge lines between sculpture, painting, hand craft, and daily decorations. 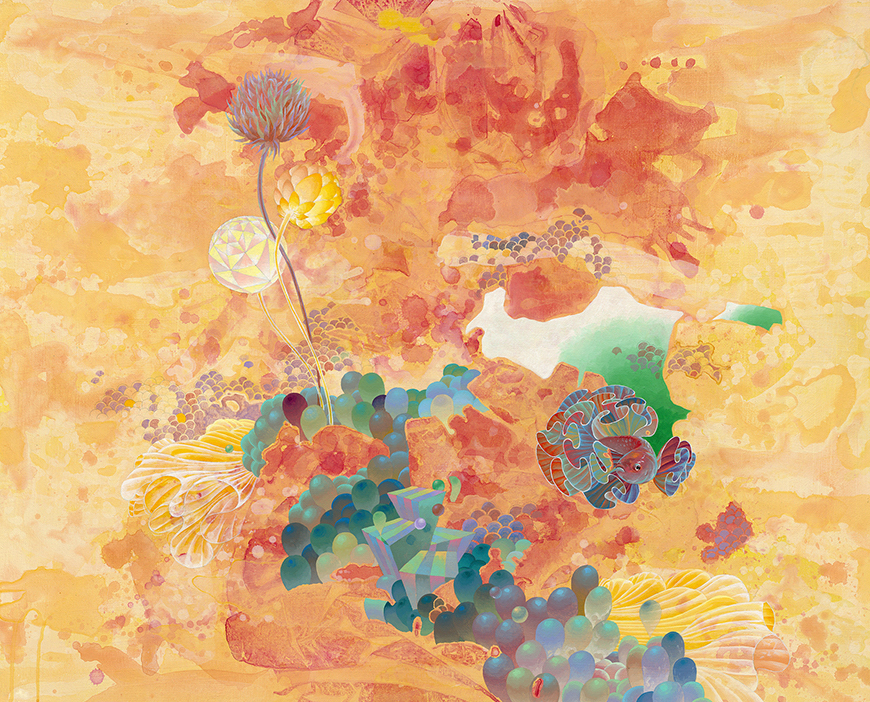 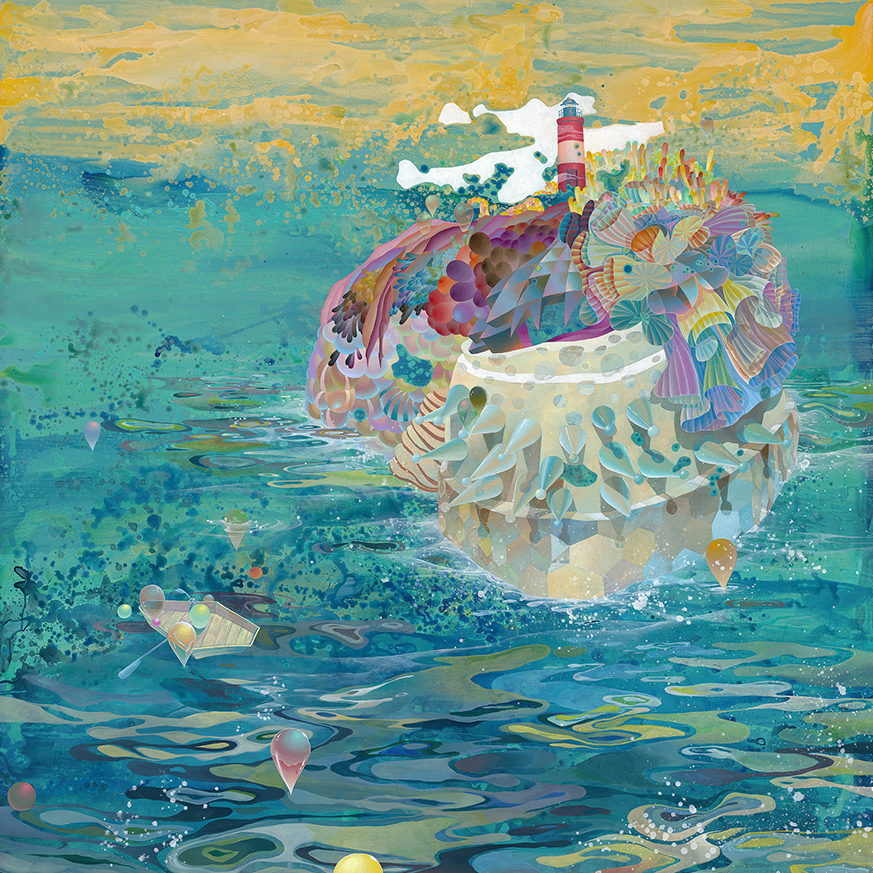 As Huang Po Hsun doing the decorative paintings to respond the contemporary art, he is bringing back the narrative which is eliminated by contemporary art. His works are not only the games of colors and shapes, but also carriers with stories. He once said that if he wasn’t an artist, he would be a writer. He is interested in writing and reading. His works often draws inspiration from literary works, especially the titles of his paintings. He tries to write down the poetic feeling into his paintings. For instance, his series of work《The Light and the Dive of a Fighting Fish》were based on the story that he had lived with a fighting fish（name: Moo-Dan, means peony）. It seemed that he directed an amazing movie that a lonely character explored the underwater with a fish companion. The series of《The Forest of Babel》were based on the inspiration taken from Wong Kar Wai’s movies and the mushroom clouds of nuclear explosions. Those works are like the scene after the world’s end in the sci-fi fictions. In 2017, he chose to name a new series with《Wonderland afar》. It’s a story that he travelled to the physical end of the world. The south point of Argentina – Ushuaia is his start point. And of course, this is another marvellous journey with splendid auroras, polar days and nights. The cities, islands, sky, seas, light houses, vehicles, unknown creatures in this series are the fantasies that created by an otaku who wants to escape from the hard busy lonely life.
Huang Po Hsun’s works always remind me the《luxe calme et volupté》by Henri Matisse. It’s a pastoral poetic work finished in 1905. The women sitting, lying or standing in the tender lights beside the river bank with a company of tea and snacks are dressing or dancing. It’s a normal motif, however this is inherited from 16th pastoral tradition - from the《Arcadia》of Poussin, to《Bois Sacré》of Puvis de Chavannes, and the《Le Déjeuner sur l'herbe》of Édouard Manet. This is an important motif of Henri Matisse. He tried to revoke the golden ages when the human and nature were in harmony, as the name of this painting quoted from the poetry of Charles Baudelaire's: Là, tout n'est qu'ordre et beauté, Luxe, calme et volupté. (There, with all the orders and beauties, luxuries, calm, and the senses). The truth is Baudelaire is describing an ideal world that everyone can be with whom they love. It’s a heaven. Matisse yearned for it and declared he painted this works with the colors of rainbow. Thus, the colors can be harmony with the lines, and the arguments between them can be ended. I am not sure whether Huang Po Hsun was familiar with this argument of colors and lines or not, or with the ideas of Matisse’s paintings. However he is truly trying to find a mind shelter where the colors and shapes can coexist harmonically in this modern, cold, isolated society.
Matisse used to be the founder of the aggressive ‘Les Fauves’. However he said clearly in 1908 that he wanted his art to be one ‘of balance, of purity and serenity devoid of troubling or depressing subject matter,’ and this aspiration was an important influence on some, such as Clement Greenberg, who looked to art to provide shelter from the disorientation of the modern world. We now know that Matisse praised the art which can make people easier, comfortable, and meditative. The funny thing is that Huang Po Hsun once said ‘I do not want my art to be astonish. I do not want to found a new wave of aesthetics. I will leave that to others. I want people can feel warm, comfortable and accompanied in my works.’ And he said ‘no matter who you are, when you are at home, you would like to feel relax. Therefore, I want my works can be companions with you.’ Just like Henri Matisse, Huang Po Hsun would like to provide the placebo of mind. His paintings always start from reality and lead to somewhere or any spot on the time line. He brought us to experience the other time and space such as Arcadia, undersea kingdom, world’s end, or the Armageddon. Wherever you’ve reached, it will be a place colored with rainbow and the ‘luxe calme et volupté’.